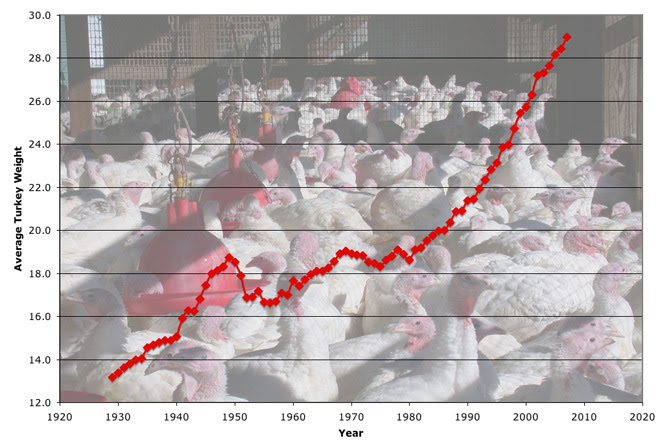 The bull market (heh) can be reduced to one key statistic, lifetime net merit, though there are many nuances that the single number cannot capture. Net merit denotes the likely additive value of a bull's genetics. The number is actually denominated in dollars because it is an estimate of how much a bull's genetic material will likely improve the revenue from a given cow. A very complicated equation weights all of the factors that go into dairy breeding and -- voila -- you come out with this single number. For example, a bull that could help a cow make an extra 1000 pounds of milk over her lifetime only gets an increase of $1 in net merit while a bull who will help that same cow produce a pound more protein will get $3.41 more in net merit. An increase of a single month of predicted productive life yields $35 more.

No futuristic technologies are needed to make progress, although they would expedite the process: just feed accurate enough measurements of animal welfare into the net merit equation and similar progress could begin on the new trait.

This is a very interesting topic, and I'd like to see more on it.

What level of pain reduction would make it morally ok to eat meat though? Even if the animal is unable to feel pain at all you are still depriving it of life for taste or convinince. Neither of these factors hold any moral weight. Aswell as this the environmental impact of livestock would not be mitigated by this endeavour. So even with significant changes in the animals ability to feel pain vitro meat or veganism is still by far a much more tenable position.

This post wasn't arguing that eating meat would be good, it was pointing out that biological changes along the lines David Pearce suggests are possible with more prosaic technology, which would at least reduce the pain and fear involved.

If this sort of thing were done, classify it with cage-free campaigns or selecting broiler chickens that get fewer leg injuries, not with animal product substitutes or veganism.

Looking back, I think the framing of the post was tactless and distracting, and I have edited it to just leave the substantive point.