Summary: While some estimates that open borders would double gross world product implicitly project the migration of most of the developed country labor force, a much smaller quantity of migration might cut global poverty rates by half or better. The additional income to the poorest required to bring them above extreme poverty lines is in the hundreds of billions of dollars per annum, while doubling world product would approach a hundred trillion dollars of additional annual output. Legal barriers to migration, and blocked desire to migrate, are most extreme for the poorest countries, suggesting extra migrants from those sources. While migrants may receive more income gains than are needed to escape absolute poverty remittances to family, trade, and investment may help to distribute the gains more widely. Overall, the case that migration liberalization for less skilled workers could eliminate most absolute poverty is significantly more robust than the most extreme estimates of global output gains.


In a previous post, I noted that some estimates of the economic gains of open borders depended on the migration of billions of people, including most of the working-age population of the developing world, and far more than suggested by surveys of desire to migrate. This makes the case for a medium term doubling of gross world product from open borders less plausible, although other gains of migration not included in those estimates (such as the spread of institutions and technology by migrants causing home country development) might lead to a doubling.

However, it is well worth noting that the number of migrants required to slash global rates of extreme poverty is much smaller than required to double world product.

Cutting poverty in half requires gains to the poor of much less than 100% of world GDP
Current gross world product is close to $90 trillion. World Bank data up to 2008 shows the declining number of people making less than the old absolute poverty line of $1 per day(in 2005 $USD, PPP), and the new poverty line of $1.25 per day. 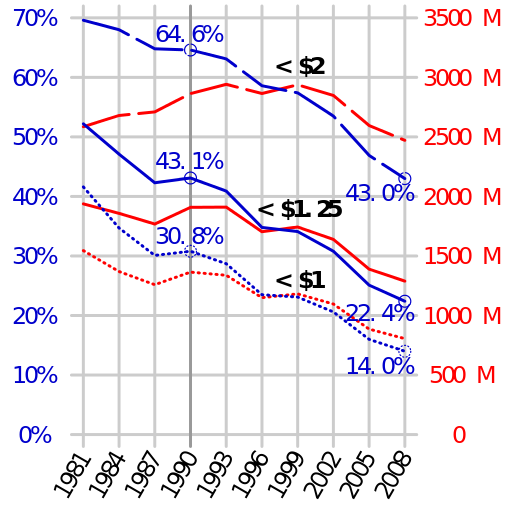 Inflation since 2005 has been modest, and poverty has fallen further since 2008, so the "income gap" between the current incomes of those in extreme poverty and their incomes if boosted to $1 or $1.25 would amount to a few hundred billion dollars per year. If cheap successful cash transfers targeted directly to the poorest were under consideration less than 0.5% of gross world product would be needed.

Of course the gains of migration liberalization would not be perfectly targeted, but this does provide a clear plausibility to liberalization cutting absolute poverty rates in half again (as happened in the last few decades) even if total economic gains fall well short of doubling world product.

Migration from the poorest countries is currently disproportionately restricted
Michael Clemens recently reviewed research on migration rates under existing immigration laws, which finds a U-shaped curve when emigration rates and per capita income are plotted, below. This might suggest that the poorest will lack the financial resources to invest in migration, or otherwise fail to take advantage of new opportunities. 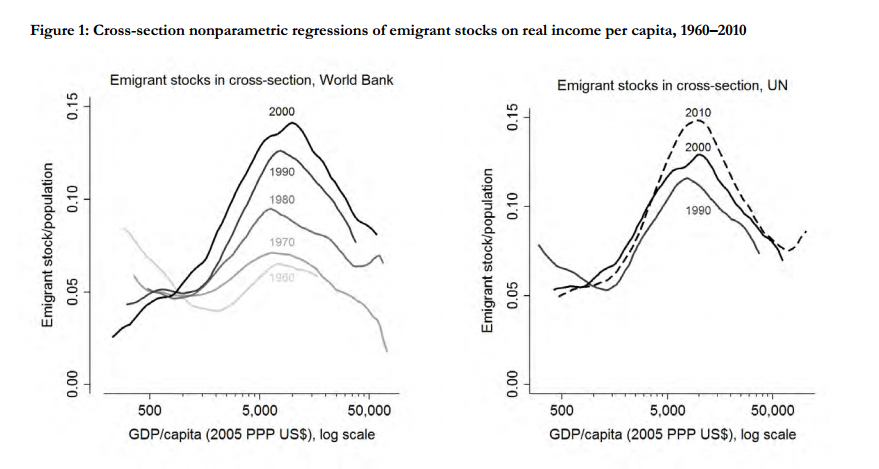 However, this pattern occurs in the context of migration systems in most developed countries that are overwhelmingly skewed towards skilled and educated workers:

Since the lowest income countries have the lowest skill levels, they face greater legal barriers to migration, which would be relaxed under liberalization.

Sometimes there are openly discriminatory barriers, as in the case of Singapore, where low-skill guest workers must normally come from a list of approved countries, with the list varying by sector. For some categories there are no truly poor countries, and while others such as construction permit the admission of migrants from poor countries in South Asia, most of the world is excluded, e.g. all of Sub-Saharan Africa.

A 2011 survey of desire to migrate found that 36% of Africans expressed desire to migrate, disproportionately of working age, accounting for 166 million out of approximately 700 million worldwide, while desire to migrate was much less common in Asia. Since China is largely succeeding in eliminating poverty, and East and South Asia are following it, at varying rates, projections suggest that most absolute (at the $1 or $1.25 levels, not $2) poverty may be concentrated in Africa within the next several decades. I.e. the trends are for desire to migrate and poverty to coincide.

Migrants gain disproportionately, but remittances, trade, and investment spread gains
If one is focused on the poorest because of their higher marginal utility of income, one issue is that when only some of the poor migrate, those who do may gain so much as to significantly reduce their marginal gains from income. For example Clemens estimates the place premium for mid-skilled workers migrating from Haiti to the United States as multiplying mean income by some 10 times. This is obviously a tremendous gain to the migrant, but it might not generate as much human welfare as doubling the incomes of 10 different workers, although more than doubling the incomes of 2 workers.

However, a single migrant worker may send remittances to a number of other family members back home. For 2009, the World Bank told us:


the World Bank estimates that remittances totalled USD 440 billion in 2010, of which USD 325 billion went to developing countries, involving some 192 million migrants or 3.0% of world population. For some individual recipient countries, remittances can be as high as a third of GDP. Remittances also now account for about a third of total global external finance; moreover, the flow of remittances seems to be significantly more stable than other forms of external finance. 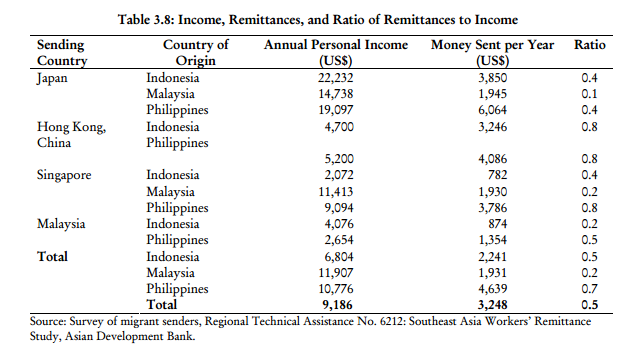 Remittances may also increase home-town wages, although the net effect on inequality will vary depending on the distribution of migration. If migration rates approached expressed willingness in surveys, including for unskilled workers, enough of Africa could migrate for almost everyone to have a migrant in their close family.

Correlational and observational studies suggest a connection between migration and trade and investment flows (as migrants buy things from home, invest there, or help enable other foreign investment), although causation is in question, and causal effects may substitute for other possible trade and investment partners. Clemens:

Beyond cash, skilled workers abroad interact in many ways with their home countries that have the potential for large positive effects. The more highly skilled emigrants from one country live in another, the more trade occurs between those countries (Rauch 1999; Felbermayr and Toubal 2012). The share of foreign direct investment that countries receive from the United States is positively correlated with the number of college graduates from that country present in the United States (Kugler and Rapoport 2007; Docquier and Lodigiani 2010; Javorcik et al. 2011). Scientiﬁc innovations arrive in many developing countries through interaction with skilled emigrants (Kerr 2008). Indian, Chinese, and Israeli immigrants to the United States, for example, have been crucial to the formation of manufacturing and information technology hubs in those countries (Saxenian 2006; Devane 2006; Wei and Balasubramanyam 2006). There is evidence that norms of democracy (Spilimbergo 2009) and fertility (Beine et al. 2013) are conveyed to developing countries through skilled emigrants.

The direct impact of financial flows from trade, after accounting for various uncertainties, seems substantially less important than remittances, especially for large unskilled migrant flows. Investment and development impacts could be enormously important, e.g. the Chinese diaspora seems to have played a helpful role in China's development and foreign direct investment. However, skilled and high-income workers may contribute more to such idea diffusion per capita, and scaling is uncertain.

Haiti has a population of close to 10 million, and a diaspora in the vicinity of 2 million, with 1.4 million in the high income jurisdictions of the United States, Canada, France and the Bahamas. Another 500,000-800,000 live in the Dominican Republic, with a GDP per capita (PPP) of $9,646 versus Haiti's $1,242. Remittances to Haiti make up $1.7 billion or 20.6% of GDP in the World Bank data, about $1,000 per Haitian diaspora member, and more per migrant (since much of the Haitian diaspora is in later generations which have less motive to send remittances). Distributed to the poor on the basis of need, that amount would suffice to eliminate absolute poverty there.

Nonetheless, a 2008 World Bank report found 49% of Haitian households living below the $1 per day poverty line. Education and human capital are unequally distributed. The educated are able to migrate through skilled migration systems (80% leave Haiti), and can earn higher wages abroad than those few unskilled workers who are able to leave: 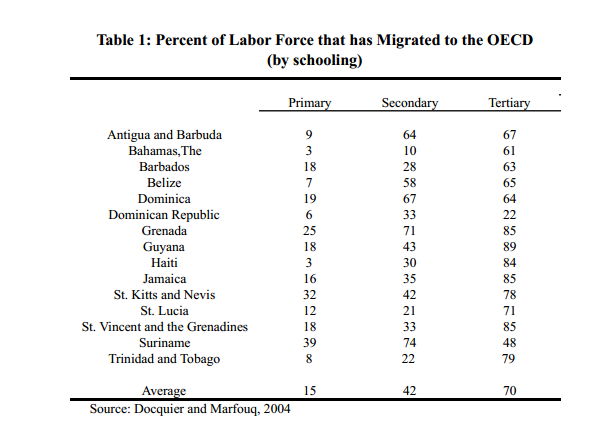 Their remittances help bring their families well above the absolute poverty line, while others are left without any migrants in their close families. Opening up unskilled migration would allow rural and less educated families to partake in migration-related revenues, although they would earn less per migrant.

Combining the various income-boosting channels, and taking into account the unequal distribution of migration even under a more liberalized regime, I'd guess that if developed countries took in hundreds of millions of unskilled workers from the poorest countries, on the order of 10-30% of the low-skill workforce in the latter (consistent with survey evidence, especially for Africa) that would suffice to eliminate most absolute poverty at the $1 per day (or $1.25) line.

Even substantially diminishing returns to unskilled labor would leave wages above absolute poverty levels
Wages for low-skill construction workers in Singapore and the United Arab Emirates are much lower (nearer $2 vs $10) than those of migrant construction workers in the United States or Japan. This may reflect lack of productivity-bolstering institutions or market conditions, and may partly reflect diminishing marginal product of low-skill labor. But even there wages for identical workers are several times as great as in India, and access to the UAE construction labor market dramatically improves household income and wealth.

The low incomes needed to alleviate poverty provide a large 'safety margin' for diminishing returns, externalities, and other problems: so long as any problems of migration are not catastrophic, migrants will be able to alleviate absolute poverty for their (extended) families.

Migration taxes could fund foreign aid
Economist Jagdish Bhagwati has long proposed migration taxes to capture some of the benefits of migration and direct it to development or other aid for those left at home. If developed countries adopted Singapore-like guest worker and migration tax policies revenues would dwarf current foreign aid budgets, and could fund a major global expansion of aid.

From some analytical perspectives, these things have little to do with each other: if rich countries don't provide more aid out of current revenue, why would they allocate a larger portion of migration taxes? One reason is that increased interaction with a place tends to increase moral attention and foreign aid directed at it (consider Iraq and Afghanistan's enormous foreign aid receipts). Improving health and education in migrant sending countries would increase the returns to foreign aid. Such a proviso might also make a political coalition for migration liberalization more stable by placating those concerned with exploitation of people from poor countries. And lastly, drawing public attention to the global poor through the migration system may simply make it easier to talk about other interactions with the poor at the same time.

Since Singapore is able to extract revenue of several billion dollars from less than a million low skill workers subject to foreign worker levies (and taxes could be higher for more skilled workers) a Bhagwati tax on one hundred million guest workers, spent on cash transfers, could suffice to slash absolute poverty (at least at the old lower lines).
Posted by Carl at Tuesday, May 27, 2014