Flow-through effects of innovation through the ages

Summary: Per the previous post, it appears that growth impacts of saving lives have historically dwarfed the immediate effects, by increasing technological innovation that eventually led to the rich and populous modern world. Active work on technological innovation contributes more to technology than the average of all activity in society, and so might be expected to have larger growth effects. Moreover, in ancient times not only did society have smaller population and output, it also invested much less of those resources into R&D. The greater neglectedness raised the marginal impact of ancient R&D enormously, so that past altruists who contributed to innovation could have had multiple orders of magnitude more impact on long-run living standards and years of life lived than those who saved lives or provided direct aid. The strength of this preference increases enormously as we consider earlier periods in history.

In my previous post I discussed the long-run growth impacts of saving a drowning child in different times and places through human history, and argued that effects on human life-years lived (through today) mediated through growth effects were vastly larger than the extra life-years lived by the children, since cumulative technological growth has increased human populations by orders of magnitude. In ancient times, saving a single child would (until Malthusian feedbacks restored equilibrium) increase total population, economic input, and innovative activity by a larger proportion than today because of the smaller population of the time. Increasing population by 1/n would likely speed progress along the technology curve by a significant fraction of 1/n as part of the general scale-up of society. Saving a child in a Middle Eastern agricultural community 10,000 years ago could have added many thousands of human life-years through the present. Saving a child from the first to cross from Eurasia to the Americas in ancient times could have produced many millions of life-years by now.

Interestingly, for almost all of human history the earlier one saved the life the greater the growth effect (since populations were smaller earlier), although deviations from Malthusian conditions provided a boost to impact recently (as a saved child could go on to have many descendants that boost total population without running into food supply constraints).

However, technological innovation does not depend on all activities in society equally. An intervention focused on those activities especially likely to contribute to technological advance could thus have had even greater effects.

According to the World Bank, today formal research and development expenditures are about 2.2% of a world economy of $84 trillion at nominal exchange rates, and $135 trillion at purchasing power parity. This reflects a massive sustained growth of proportional R&D effort in recent centuries. Some graphs from a recent FLI post: 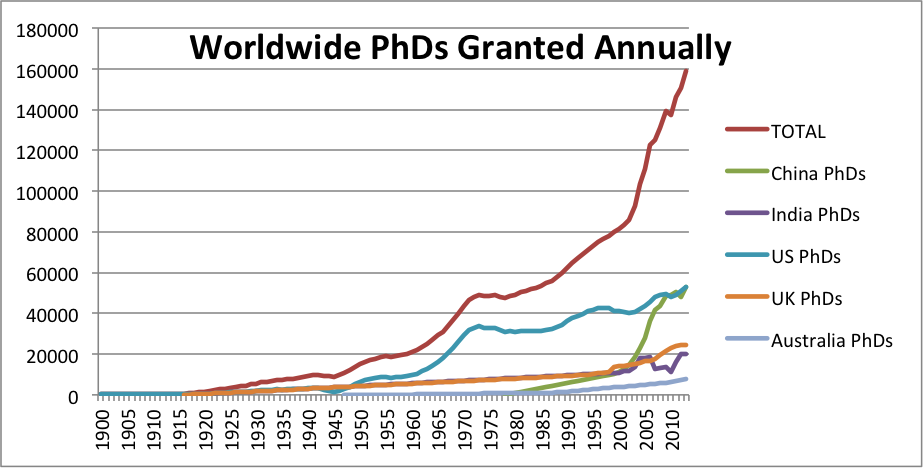 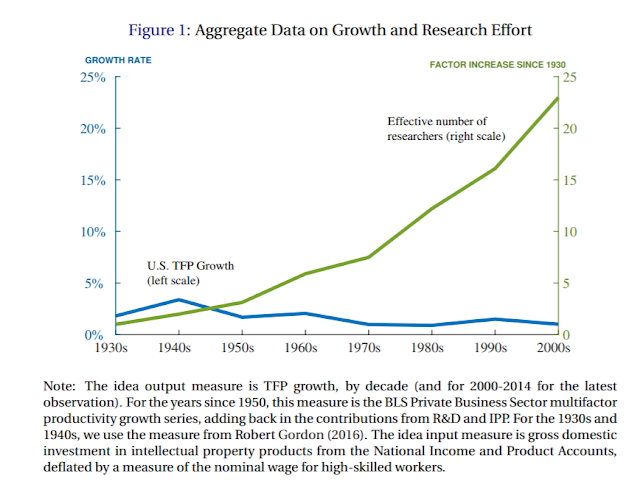 That paper also reviews a variety of data documenting a pattern of exponentially increasing inputs leading to similar or declining proportional growth rates for productivity, e.g. in agricultural yields or price-performance of computer hardware.

In ancient times there was essentially no paid profession of technological innovation, although innovations were made by people working in a field. A very small class of professional scholars existed, but was generally not focused on developing and sharing practical knowledge about the natural world. The economic historian Joel Mokyr has produced an extensive body of work discussing the development of such practices and intellectual networks leading into the Industrial Revoultion.

So an ancient innovator trying to boost population and technological capacity might have less than a thousandth as much explicit competition per capita (e.g. 1/50,000th of GDP going to R&D-ish activities instead of 1/50th). And that smaller proportion was from a much smaller population.

For most of the agricultural era it took a number of centuries to double population and output (see, e.g. Hanson on growth modes). When annual growth rates are ~0.1% instead of ~3% a correspondingly smaller productivity gain from innovation can yield the same speedup in the timeline that eventually yield huge modern populations, i.e. a 0.1% productivity gain 10,000 years ago may provide as much boost to growth today as a 3% productivity gain 10 years ago. This is because the ancient 0.1% gain would have brought us to successive technology levels faster, including modern technology levels where global growth rates of 3% are commonplace.

In ancient times, it seems that innovation efforts were vastly more impactful on long-run growth and impact than direct aid and lifesaving

I think it is generally accepted that on average, someone actively working on innovation contributes more than the population average to technological innovation even today, when enormous amounts of effort are put into R&D. I will suggest ten times as much.

In ancient times, proportional R&D investment was several orders of magnitude less, so with logarithmic or worse returns to larger innovation workforces, R&D workers' relative contribution would correspondingly be orders of magnitude higher. Say only a hundred times higher than today.

Then the impact of an extra ancient innovator on long-run growth (and life-years lived to date) would be a thousand times greater than that of saving the life of a random ancient child. This tradeoff could have been quite real: in a Malthusian world of near subsistence wages the cost of sustaining the life of a poor person through alms and supporting a scholar or craftsman were not enormously far apart, the latter would be more expensive but not by nearly enough to offset the differential impact.

In contrast in our modern era of extensive R&D the growth impact of typical innovation work may still be substantially greater than that of typical direct lifesaving, but the ratio would not be nearly so extreme.

Given longtermism, the idea of research and practical innovation was not unknowable

Thinking about 'what a longtermist altruist would have done in 500 CE' is tricky: if the counterfactual gives an ancient access to modern knowledge and hindsight, that gives an advantage that perhaps could not be reasonably anticipated. On the other hand, if we are trying to evaluate historical performance of a strategy of technical innovation or saving drowning children (although future performance is not guaranteed by past performance), then we can think about a minimal intervention to have the strategy tried in the past.

In ancient times technological change was slow, and historical studies often weak, so it was not easy to notice the potential for enormous cumulative improvements in living standards. However, local innovations did occur and spread lasting benefits (e.g. the ancient Romans saw new crops introduced to their civilization from other parts of the world, causing lasting agricultural improvements) and populations grew while history improved, so for at least thousands of years it has been possible to notice and attempt to generalize such gains.

Confidently estimating the full scope of potential for improvement would be tricky, but wide credible intervals and an expected value argument would have suggested great promise, and the extreme ratio discussed above could absorb substantial penalization.