What do historical statistics teach us about the accidental release of pandemic bioweapons?

Historically research on dangerous pathogens, for biodefense and bioweapons, has resulted in disturbingly frequent accidental infections of workers and sometimes escaping to the outside world.  Straightforward extrapolation of those accident rates suggests that large scale illegal programs working with bioweapons capable of posing global catastrophic biological risks (GCBRs) would be released into the world within a few decades.  However, if accidental release rates were so high, then why haven't there historically been more pandemics stemming from such releases?  Examining the known biological weapons programs, especially the Soviet program (by far the largest), we see that they were overwhelmingly working with diseases that were not capable of pandemic spread, with the few exceptions (particularly smallpox) subject to vaccination or having low fatality rates.  This should be expected: clearly the human population could not sustain many high fatality pandemic pathogens naturally circulating.  However, it appears that the Soviet program was engaged in active research to produce deadly pandemic pathogens, although it failed to do so with 1980s biotechnology.  If a future illegal bioweapons program were follow the Soviet example but succeed with more advanced biotechnology, historical rates of accidental release could pose a more likely threat than intentional use of the pandemic agents in warfare.

Lipsitch and Inglesby cite two US datasets of reported accidents in BSL3 labs:

Insurers and risk analysts define risk as the product of probability times consequence. Data on the probability of a laboratory-associated infection in U.S. BSL3 labs using select agents show that 4 infections have been observed over <2,044 laboratory-years of observation, indicating at least a 0.2% chance of a laboratory-acquired infection (5) per BSL3 laboratory-year. An alternative data source is from the intramural BSL3 labs at the National Institutes of Allergy and Infectious Diseases (NIAID), which report in a slightly different way: 3 accidental infections in 634,500 person-hours of work between 1982 and 2003, or about 1 accidental infection for every 100 full-time person-years (2,000 h) of work (6).

A Bulletin of the Atomic Sciences article reviews a number of disease outbreaks from laboratory escapes in the context of gain-of-function research:

Smallpox releases in Great Britain. Eradication of natural smallpox transmission made the prospect of reintroduction of the virus intolerable. This risk was clearly demonstrated in the United Kingdom, where from 1963-1978 only four cases of smallpox (with no deaths) occurred that were imported by travelers from areas where smallpox was endemic, while during this same period at least 80 cases and three deaths resulted from three separate escapes from two different accredited smallpox laboratories...

SARS has not re-emerged naturally, but there have been six escapes from virology labs: one each in Singapore and Taiwan, and four separate escapes at the same laboratory in Beijing.

In 2007, FMD appeared again in Britain, four kilometers from a biosafety level 4 laboratory—a designation indicating the highest level of lab security—located at Pirbright. The strain had caused a 1967 outbreak in the United Kingdom but was not then circulating in animals anywhere. It was, however, used in vaccine manufacture at the Pirbright facility. Investigations concluded that construction vehicles had carried mud contaminated with FMD from a defective wastewater line at Pirbright to the first farm. That outbreak identified 278 infected animals and required 1,578 animals to be culled. It disrupted UK agricultural production and exports and cost an estimated 200 million pounds.

The Soviet Biopreparat is claimed to have had over 30,000 employees (with additional bioweapons work in military and other parts of government), including on the order of 10,000 scientists. If we multiply a 50,000 staff figure by 20 years we get a million person-years. If we think that only a subset, e.g. 10,000 scientists, are comparable, the figure would be 200,000.

Using the NIAID figures would thus project 2,000-10,000 lab-acquired infections. Alibek’s book Biohazard (which it should be noted has concerns about reliability) reports accidents consistent with such rates, several of which reached the outside world:

There is also speculation that the 1977 influenza pandemic may have stemmed from accidental release, based on genomic evidence.

In general, the bulk of lab-acquired infections for the agents used in the Soviet bioweapons programs should have been nonfatal, due to a combination of low fatality rates for many of the agents, staff being vaccinated for all the agents susceptible to vaccination (e.g. against smallpox), and the administration of antibiotics to deal with the bacterial agents that seem to have made up the bulk of mass-produced weapons and research effort.

The most frequently reported laboratory-acquired infections through 1989 are listed in Table 1. 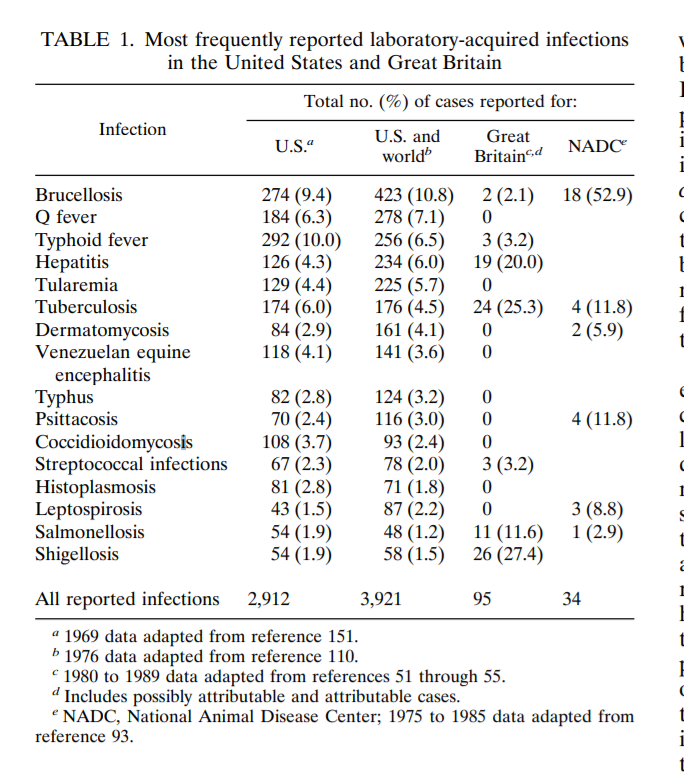 Soviet bioweapon safety standards might also be thought to be worse than U.S. ones, in line with generally greater rates of industrial accidents.

The US, UK, and Soviet BW programs overwhelmingly worked with non-pandemic agents, but the Soviet program sought to produce pandemic bioweapons

The Soviet biological weapons program was the largest and latest-running for which fairly good reports are available, more than an order of magnitude larger than the runner-up, the pre-1970 American program, which was itself far larger and more successful than any of the rest. Examining the weaponized organisms, it appears that smallpox was the only one with much potential for a large human epidemic/pandemic if released into the Soviet Union, and vaccines were available for it, since Soviet efforts to create a vaccine-resistant smallpox had not succeeded. Among pathogens researched but not weaponized, influenza variants, with much lower fatality rates than smallpox, seem to be the only other significant source of pandemic potential. A variety of bacteria could cause animal outbreaks with containable human impacts, and some viral agents local viral outbreaks (which might appear in records), but generally do not cause pandemics under modern conditions.

This is not very surprising: there can’t be too many pandemic pathogens with high fatality rates for a human population to survive, and smallpox was far and away the largest prior to vaccination and inoculation.

From Merler et al., 2013 in their discussion of pandemic risks from US laboratories:

Although BSL 4 agents, such as Ebola virus and Marburg virus, are considered the most dangerous to handle because of the often fatal outcome of the disease, they are unlikely to generate global risk because of their inefficient mechanism of person-to-person transmission and other features of the natural history of the induced diseases [12, 13]. It is therefore understood that the major threat of a pandemic escalation is provided by modified influenza viruses [10], and for this reason we focused our work on the accidental release of novel influenza strain in a densely populated area of Europe.

Looking through the agents reported to have been studied in the Soviet program confirms this picture:

The UK program weaponized a subset of the above agents (with vaccinia acting as a safe simulant for smallpox), in an earlier period with fewer known agents and less biotechnology.

The US biological weapons program stockpiled anthrax, tularemia, brucellosis, Q-fever, VEE, and some toxins, and investigated a wider range of agents.

One might think that biological weapons programs would desire to only produce weapons that could be ‘aimed’ to target the enemy, but large-scale Soviet work on smallpox, including attempts at producing vaccine resistance, suggest that in least in that case strategic pandemic weapons were pursued (Alibek claims that the Soviet program worked to develop weapons with no cures, whereas US efforts focused on natural pathogens that US troops could be vaccinated against or protected against with antibiotics). Smallpox appeared to make up a substantial portion of total Soviet bioweapon efforts, with tons of production.

Thus, there is reason to think that if biotechnology makes it possible to engineer novel GCBR pandemic weapons they would be pursued by a future Soviet-style program, i.e. that historically there were almost no pandemic potential pathogens to be accidentally released into the general population, but this was more due to technological limits than motive. In the case of smallpox, risk of accidental release was also greatly reduced by the vaccination of staff, and there was still an outbreak that infected 10 people and killed three people (the latter three unvaccinated, the survivors vaccinated) outside the program due to infection from testing in the Aral Sea in 1971.

Lipsitch and Inglesby cite the simulation study of Merler et al., 2013 for a 10-20% chance of widespread community transmission from a lab-acquired potential pandemic influenza virus and mention alternative simulations giving results of 5% to 60%. This is based off of quarantine and contact tracing interventions.

A simulation model of an accidental infection of a laboratory worker with a transmissible influenza virus strain estimated about a 10 to 20% risk that such an infection would escape control and spread widely (7). Alternative estimates from simple models range from about 5% to 60%. Multiplying the probability of an accidental laboratory-acquired infection per lab-year (0.2%) or full-time worker-year (1%) by the probability that the infection leads to global spread (5% to 60%) provides an estimate that work with a novel, transmissible form of influenza virus carries a risk of between 0.01% and 0.1% per laboratory-year of creating a pandemic, using the select agent data, or between 0.05% and 0.6% per full-time worker-year using the NIAID data.

For GCBR pathogens risk might be lowered by initially higher security (although contra this thesis, potential pandemic pathogen gain of function research with orders of magnitude greater risk than typical select agent research has not had correspondingly higher biosafety or security standards), e.g. biological weapons research in rural areas as opposed to university labs in urban areas. Future technological advances such as ubiquitous sequencing may also improve detection and tracing. However, insofar as pandemic or GCBR pathogens are ones for which there are no vaccines, transmission is asymptomatic, and reproductive rate is high, they may be more likely to infect workers and to escape containment.

Accidental release vs intentional use of pandemic bioweapons

Pandemic bioweapons, particularly GCBR ones, expected to decimate the wielder's own population would only be intentionally used by states under bizarre and unlikely circumstances of national suicide. The low annual rate of use of nuclear weapons by the world's several nuclear powers likely bounds that risk from above, and appears to be less than one in centuries per nuclear power thus far.

On the other hand, multiple accidental community releases in a decade or so in the Soviet program suggest a base rate at least an order of magnitude greater, as a likely short- to medium-run outcome. A state developing such weapons with historically observed safety standards would appear to be endangering itself much more than it could help itself (especially compared to conventional forces or nuclear weapons, which do not spontaneously launch anywhere close to the rate of bioweapon accidental release), while imposing massive negative externalities on the rest of the world.

This suggests increased value for political efforts to ensure and verify that no states will follow the Soviet example of attempting to develop GCBR pathogens with enormous accident rates, at scale and with modern or future technology. But it also suggests that general improvements in biosafety technology and methodology (which can be conducted by independent research actors) might greatly reduce the risk of any illegal state programs that do exist by making them less likely to accidentally release weapons. The lack of visible release of engineered pandemics also provides nontrivial evidence against the existence of such a large-scale program existing and having secretly produced such pandemic weapons in recent decades.