Recent growth at Giving What We Can and GiveWell

Summary: For the last three years Giving What We Can's number of additional members each year has been fairly steady. The same was true of GiveWell's increases in number of donors and money moved (excluding Good Ventures) for 2010-2012. However, small donors to GiveWell have shown accelerated growth in 2013 following Peter Singer's TED talk, which may be reflected by large donors as the figures for the 2013 giving season become known.


We currently have 407 members, from 28 countries,who together have pledged more than 160 million dollars towards this end.

Combining that with figures from pages 6 and 9 of a GWWC self-evaluation I get this table:

Giving What We Can launched in November 2009, with the initial membership reflecting years of preparatory work by Toby Ord. Absolute increase in membership tripled after 2010, but has remained steady since then, approximately linear rather than exponential growth.

As the GWWC self-evaluation discusses 2012 saw the addition of paid staff to Giving What We Can (there were large volunteer efforts previously), but with no visible effect. The staff may have counteracted what would otherwise have been slowing growth, and even modest success in that could have put GWWC donations ahead of the object-level charities it recommends, but there was no surge of increased growth.


And here are proportional growth rates:

So again over this period (2010-2012) we seem to be seeing growth that looks more linear than exponential. Growth in donors is greater than growth in money moved because small donors dominate the former.

Including Good Ventures would produce a curve that more closely resembled proportional growth, but it is unclear whether this is appropriate, particularly if Good Ventures is the "smart money" giving to encourage less sophisticated donors and fuel movement growth with its donations. GiveWell's self-evaluation page provides this chart: 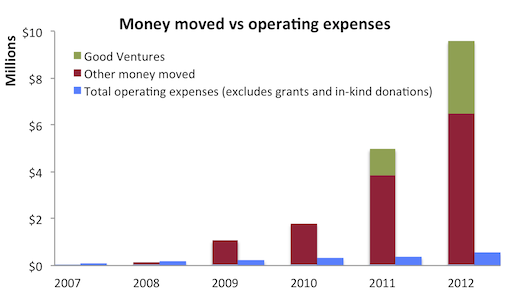 Peter Singer's TED talk in 2013 and small donor data
Will growth pick up in 2013? After the first quarter of 2013 GiveWell posted slightly but not significantly faster growth figures:

But after philosopher, Giving What We Can member, and GiveWell fan Peter Singer's TED talk, which at the time of this posting has had 694,410 views, the second quarter statistics were much improved:

Will GiveWell's money moved, driven by large donors, increase accordingly? Historically there has been a fair connection, with complicating factors as AMF is removed from GiveWell's picks (without any replacement said to have the same quality by GiveWell) while Good Ventures offers matching grants for GiveDirectly donations.

Thoughts
In a conversation recently I contrasted Giving What We Can's more linear growth to my perception of GiveWell's more exponential growth (based most strongly on money moved, without excluding Good Ventures, and the 2013 data on small donors). However, examining the data more closely made me see less difference, and less of a stable difference, between the two growth paths.

Relatively stable recent growth should lead to at least slightly lower expectation (this is very noisy and limited data) for these organizations than smooth exponential growth would, but there remains the possibility that new developments will change their growth dynamics (witness GWWC's shift from 2010 to 2011-, and GiveWell's 2013 surge in donor numbers). Investments in improving those growth tracks (as opposed to simply pushing along existing ones) may be especially promising.

It's not really clear to me based on this data that the best-fit line fits any better than the best-fit exponential, given how ridiculously noisy the data is and how low the sample size. Exponential growth with an unusually good middle year can easily look linear. I think the real worry here is overfitting.

Ben, yes I would not bet much on any generative model based on these data.

Thanks for writing this up. I think it's important for people considering working for/donating to these orgs to think about the growth rates. Higher growth rates suggest more impressive returns to speeding up the development of the organization through donations or human capital investment.

When I originally looked at this data, I looked at it in a way that is a bit less favorable to GWWC, but also seems like more of an apples-to-apples comparison.

Under "absolute changes" I do look at absolute change in money moved and donors recruited by GiveWell. I'm not sure quite what you mean.

I'm saying that if you look at the metrics I looked at, then the summary "GiveWell's growth is more exponential, GWWC's is more linear" seems about right, contra what you said in the final section of the post.

Maybe the main number I'm disagreeing with is the percentage growth figures for GWWC. I'd be focusing on the 107, 107, and 120 boosts in number of GWWC members. There is a very small % gain in the output per year, but there is a substantial % gain in GiveWell's output per year as measured by money moved. Hope that clarifies.

Thanks for the information, Carl. Good to know that the effort I put into the TED talk was worth it!