What portion of a boost to global GDP goes to the poor?

Summary: How should individuals compare the impact of donations made to the world's poorest with changes in overall economic activity which are not specifically targeted at the poor, but proportionally increase incomes worldwide? World income is on the order of 30 times income for GiveDirectly recipients, so the cost of generating a similar immediate boost in log income would also be about 30 times as great. Some industries are more evenly distributed across the world than others: an economic change that delivered equal absolute dollars gain to people around the world might only need to be a few times greater. I discuss some industries that may illustrate these poles and intermediate levels. Changes in foreign aid from dollars to rich countries appear less important than growth impacts on poor countries.

Individual cash transfers to the poorest vs diffuse externalities on economic output
GiveDirectly, one of GiveWell's top charities (with the biggest endorsements in personal donations and matching from GiveWell and Good Ventures staff) sends cash by phone to very poor individuals. GiveWell's page on it mentions 2012 data from Kenya about the incomes of the eligible:


Overall, mean and median daily per capita consumption among eligible households are $0.65 and $0.55 at nominal rates, and 74% are below the Kenyan poverty line, indicating a very poor population.

Individuals get diminishing returns in turning income into health, education, psychological well-being, and similar measures. As I discussed in a recent post, it is plausible that successive doublings of income give similar or declining absolute changes in individual welfare, i.e. a dollar in the hands of someone with 1/100th the real consumption/income will deliver on the order of 100 times the marginal immediate personal welfare.

A number of people considering earning to give are interested in giving to GiveWell's top charities, but also think that their work will affect the global economy in other ways (changing technology, efficiency of production, etc). They then ask the question of how much good one dollar delivered to the poorest compares to one dollar of general economic boost.

Some economic gains will be localized to a particular country, but others will impact the whole world, e.g. through changing the price of globally traded commodities such as food, oil, computers, automobiles. I look at this question from several angles below.

Diffuse per person gains
World Bank data shows that the absolutely poor still make up a substantial portion of the world population, although a declining one: 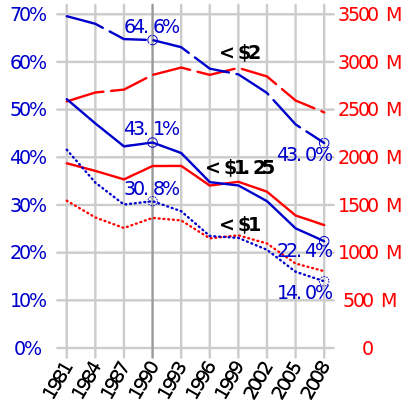 This suggests that cash transfers distributed to random humans might have direct welfare effects within a moderate factor of GiveDirectly transfers. When I used the (poor) data from my post on log-income the cost per unit of log income was in the range of 3-4 times as great when distributing dollars evenly among humans as when targeting those with incomes around $300.

Indirect economic effects with a per capita distributive effect seem very rare, perhaps including almost-universally deployed vaccines (which the rich do not take more doses of).

Per dollar gains
Suppose we instead consider some innovation or development which provides a proportional increase to economic activity everywhere, i.e. an across-the-board percentage increase in income. Wikipedia gives world product per capita (PPP) in 2012 of $11,964, about 33 times median income and 28 times mean income for GiveDirectly recipients. The cost per proportional change in recipient income will scale by the same factor

Industries vary in their relative importance to the rich and poor
Different industries and products vary dramatically in their scale relative to total income around the world.

Energy intensity, a measure of energy consumption per unit of GDP, does not show a very strong trend. Changes in energy technology may therefore come closer to the 'across-the-board proportional GDP boost.'


My impression is that food is more tilted towards the developing world. In raw calorie consumption, rich countries such as the US and Western Europe consume in the vicinity of 3,500 kilocalories per day, while the poorest countries in sub-Saharan Africa and south Asia cluster around 2,000 calories.

A large portion of the world's plant food production is fed to livestock to produce meat, and meat consumption is very strongly tilted towards rich countries. Taking this into account, I'd guess that the cost per increase in log income would still be substantially better than across-the-board world GDP boosting. [I plan to do more investigation of this, and get actual figures.]

Again, vaccines would be one of the more promising candidates for an expense that acts as a near-fixed cost for people worldwide.

Foreign aid
Rich countries provide official development assistance to poor countries. However, on average (weighting by GDP) less than 0.5% of rich country incomes go to it and it is not strictly targeted at the poorest. It seems fair to say that this component on its own is less important than the share of an across-the-board proportional income increase that would go directly to the global poor, comparing a factor of 200+ to ~30. 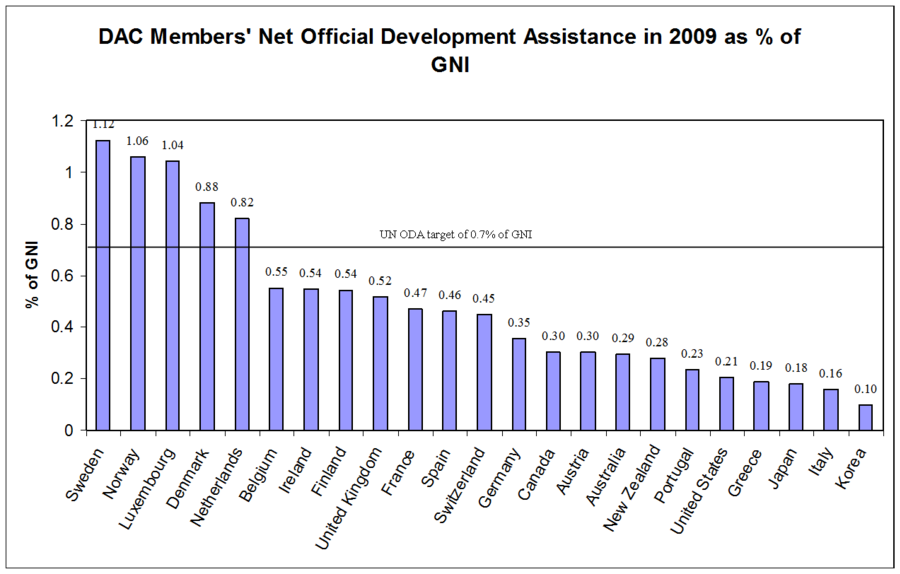 Research and development
On average, a larger proportion of rich country incomes is spent on research and development, which is plausibly especially important. The poorest countries tend to spend a small fraction of a percent, while the richest mostly exceed 1.5%. However, there are major exceptions: China spends 1.97%, and India 0.9%.

Omitted longer-term effects
This discussion leaves out many long-run effects, including differing saving rates, flow-through effects of changes in development and wisdom, growth rates (total GDP is plausibly more important than log GDP in technological advance and economic growth). In my view, the long-run impacts are even more important than the short-run ones, but the question of how global GDP changes affect the poor is both interesting in its own right, and feeds into the longer-run analysis.
Posted by Carl at Thursday, January 23, 2014

You might be interested in a paper, "Growth is still good for the poor" by Dollar, et al. They find that ~75% of the income rises of the poor are due to economic growth, ~25% due to other factors, but they can't identify any specific pro-poor policies in the data. Of course, one problem with the study is that you'd expect certain policies to have different effects on the poor depending on the stage of economic development, so looking across all countries might drown out some effects. They use Bayesian Model Averaging, a technique I'm not familiar with, so I have a hard time interpreting the results. But they do have some interesting findings for agricultural growth, life expectancy increases, and inflation:
"The three exceptions in Table 6 and in Table 7 are relative growth in agriculture, changes in life
expectancy, and inflation. Consistent with existing findings in the literature, faster growth in agriculture
is significantly associated with increase of the income share of the poorest 20 percent in 29 percent of
the specifications considered. For the poorest 40 percent, faster growth in agriculture enters significantly
in 11 percent of the specifications. This reflects the reality that many of the poor in developing countries
work in agriculture, so that faster growth in this sector is likely to disproportionately benefit the poor.
The results for changes in life expectancy and changes in inflation are somewhat puzzling. In about 25
(42) percent of specifications, increases in life expectancy are significantly associated with reductions in
the income share of the poorest 20 (40) percent, while the results suggest in 39 (32) percent of
specifications that increases in inflation are associated with a higher income share of the poorest 20 (40)
percent. We should not take these puzzling results too seriously however, because the findings hold only
for a relatively small set of models, moreover ones with low probabilities."